The consequences of environmental issues on populations were the subject of a conversation between the Secretary of Institutional Articulation and Environmental Citizenship of the Ministry of Environment of Brazil, Edson Duarte, and the regional director of the United Nations Population Fund (UNFPA) for the Latin America and the Caribbean, Esteban Caballero. 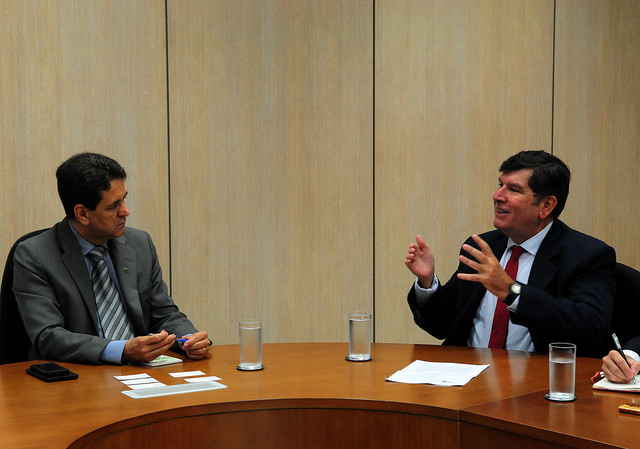 The aspects of the technical cooperation project ‘Population Dynamics and Implications for Sustainable Planning’ were discussed at the meeting. The project aims to develop elements to improve environmental policy, which consider the impact of population dynamics as well as the principles for a well-defined and structured planning of land use and occupation and the provision of basic services.

The project is in the third stage, focused on studies that provide key arguments on the impact of population dynamics in the sustainability agenda in Brazil and on the discussions between population dynamics and the environment. In the second stage, the objective was the analysis of the international scenario and the construction of probable scenarios to support the improvement of Brazilian environmental policy. In the first stage, the focus was on the studies to serve as a basis for the Rio+20 discussions.

For Edson Duarte, a partnership with the United Nations Population Fund is strategic. “Environmental issues influenced mainly by the climate change have caused consequences to the populations. We have already seen migratory flows that are becoming more pronounced in various regions of the country. They not only impact people’s quality of life but also cause environmental impacts,” he said.

According to Esteban Caballero, the research agenda encompassed by the project touches on a strategic and very actual point, which is the relation between population and environment in different contexts, urban, municipal, agricultural. “If we do not put them on the table we will have a sustainable development that does not take into account the population factor, which is central for us to continue developing, but with sustainable production and consumption patterns,” he said.